In this “Meet a Hansonite” blog series, we’ve been introducing you to our fellow Hansonites, telling you a little about their background and passions, and learning what they like most about working at Hanson. We’ve recently gotten to know more about Associate Creative Director Chris Hatfield, Visual Designer Becca Maag, and Senior Software Engineer David Williams. Today, we’re getting to know Joe Holub, Director of Experience Delivery.

Sally: Joe, how long have you been at Hanson?

Sally: What’s your role here? Describe it for someone who may not be familiar.

Joe: I’m Hanson’s Junk Drawer. I say that jokingly, as I like to describe my role as anything that isn’t specifically someone else’s job. I was hired as a functional architect (and moonlighted as a project manager), but I recently became the Director of Experience Delivery, which encompasses functional architecture, project management, and quality assurance. In functional architecture, we translate the strategic and creative vision into a buildable piece of software, and oversee the metrics and SEO implementation. In project management, we work with the build team to create a plan to carry out a project on-time and on-budget. In quality assurance, we support the build team to ensure that we built what we were supposed to and everything meets Hanson’s and our clients’ quality expectations. So in short, I oversee all the roles that support the build team of front-end developers and engineers.

Sally: What 3 things do you love most about your job?

Joe: I love avoiding being featured in the blog (obviously I failed), sneaking NERF gun shots at Mindy Withrow (because she harasses us to participate in the blog), and adding the proper amount of snark, animated gifs, and memes to all Slack conversations (I pulled no punches when asked to respond to these questions for the blog).

Seriously though, I enjoy taking complex problems and breaking them down and coming up with solutions to make people’s experiences with technology better. I enjoy the volume of vastly different industries and people which we get to work with. And I enjoy being able to contribute to the crazy things we imagine and end up building.

Sally: What’s the coolest project you’ve ever worked on here at Hanson?

Joe: That depends on which hat I was wearing.

As a strategist, one of my favorites was a heavy user experience project where the prototyping was divided among three strategists. The conversations about the most nuanced profile completion-driving tactics and UX wonk was one of the most interesting things I’ve ever gotten to nerd out on.

As a project manager, it would have to be the original build and launch of NewsSlide. This was a huge build with multiple sub-builds on different platforms and complexity at every turn. In the moment it was very stressful, but now looking back two plus years later it was quite an accomplishment, and still super cool.

In the metrics world, I can’t pick one. We do a lot of complex builds with crazy complex custom metrics tracking all with very unique tracking challenges. It’s a data nerd’s dream.

Sally: What are some things you’re passionate about?

Joe: I’m a DIYer, and any project I take on I’m passionate about. I like digging into a problem, figuring out how it ticks, working out a solution, and then fixing the issue. I enjoy this in project management, UX, auto maintenance, home improvement, anywhere. I just enjoy a challenge to be solved, I don’t care if it is technological or hands-on.

Sally: Do you have a favorite newspaper or blog you read regularly?

Joe: I read some digests of stuff daily from some aggregators I’ve set up, but I am more into Podcasts and YouTube videos. I literally have hundreds of podcasts and channels that I follow, from UX, Mathematics, Productivity, Design, Architecture, History, Technology, and Physics (particularly Quantum and Astro). Plus, I read (and listen to audiobooks of) a lot of Science Fiction. My interests are constantly changing–currently, I’m obsessed with quantum physics and mathematics, so most of my go-to stuff today is in those realms.

Here are a few things I’ve been reading/listening/watching lately:

Sally: Before working at Hanson, what was the most unusual or interesting job you’ve ever had?

Joe: I was the shop supervisor in charge of the truck drivers and shop hands for a commercial painting company all through college (I started as a shop hand in high school). I’ve been in almost every factory and commercial space in northwest Ohio at one point or another, and I’ve seen hundreds of production lines and working spaces and driven every piece of equipment, lift, or size truck you can think of. My job was to make it so a painter showed up on the first day, had what they needed there already, that equipment worked, and then to allow them to leave to go to the next site without having to worry about the site getting cleaned up.

By the way, I learned from this job that I hate paint and painting–you couldn’t pay me enough money to be a painter–but the equipment driving, equipment maintenance, and logistics I loved. I learned a lot in this job about being a leader (even when everyone reporting to you was older with more experience), about being adaptable and just doing things because they needed done even if it wasn’t my job, and about the value of planning and communication.

Sally: Last question. If you could describe Hanson in 3 words, what would they be? 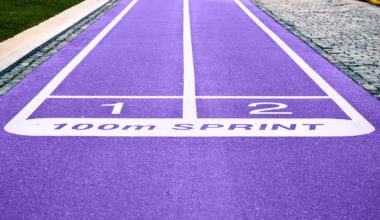